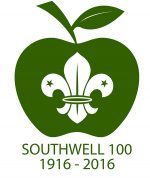 Although there is no registration document earlier that 1928 until 1919 all registrations were carried out at local level so it is possible that the Group was formed in WW1 but did not survive the War. The school history does refer to the “cadet corps being disbanded in 1922, and, in some respects, replaced by a school scout troop”.

Interestingly from a WW1 prospective Stephen Pulford the Scout Master (and teacher at Minster school) in 1946 had a long connection with Southwell. His father Reginald lived on Pollards Lane Southwell and left Southwell to serve in Italy with the Royal Garrison Artillery in 1915. Steve Pulford Personal Archive including numerous Southwell Scouting images is now available on the OldSouthwellian website.